Alexandrian Witchcraft: an Ascent to the Numinous by Sharon Day

The late Alex Sanders, "Ascent to the Numinous" might not at first be the term that springs to mind when considering his heritage

Following the decades of controversy that have surrounded the late Alex Sanders, “Ascent to the Numinous” might not at first be the term that springs to mind when considering his heritage and, more specifically, the type of wiccan practice associated with him.

He has been labelled, among other things, a ‘showman’, a ‘plagiariser’, a ‘fascinator’, a ‘teller-of-tall-tales’, usually backed by accounts, purportedly based on personal experience, of his darker side. All, to varying degrees may well contain some element of truth.

Less common or at least less public are the innumerable accounts of his unbridled generosity; his knack of diverting unwanted attention from those loyal to him; and, most important of all perhaps, his intuitive grasp of the Mysteries, not to mention his ability to impart what he learned to his students and, through them, those initiates who to this day yearn to experience them.

Thanks to him, what today is known as Alexandrian witchcraft, its name associated with his own, was adapted – without ever betraying – those wiccan traditions that Gerald Gardner and others did so much to revive. By doing it, he fostered an approach that was at once both contemporary and fully respectful of the past, mindful of those traditions which all witches, irrespective of label, cherish and keep alive to this day.

The presenter will expand on these themes in her discourse.

American by birth and British by marriage, Sharon’s academic career included one year in Japan as an exchange student in 1980. She would return there, having graduated from law school in New York City in 1992, with her husband, also a lawyer, when he took up a post in Tokyo years later.

After repatriating to London in 1997, Sharon felt drawn to esotericism and the occult, subsequently discovering what she felt was a vocation within Alexandrian witchcraft. Her search for suitable training and practical experience took her from London to Australia, the United States, and finally back to London, where she became the personal student of Maxine Sanders, co-founder of the Alexandrian Tradition.

Today, she leads the Coven of the Stag King in London under the eldership – and discreet guidance- of Maxine.

Sharon is also the founder of Rose Ankh Publishing Ltd, a book publisher of unique occult, historical, philosophical, and biographical works (www.roseankhpublishing.com) as well as an online historical archive dedicated to the Alexandrian witchcraft tradition (www.alexandrianwitchcraft.org). 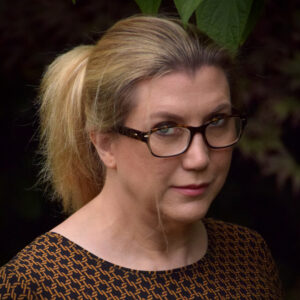