In this presentation, I explore how modern Witches and Pagans narrate and interact with these other-than-human beings

Fairy beliefs and narratives are very much alive among contemporary Witches and Pagans; in fact, they are undergoing a revival. In this presentation, based on my research since 2015, I explore how modern Witches and Pagans narrate and interact with these other-than-human beings. I argue that fairies behave differently in Pagan narratives than the way they behave in traditional legends; they have undergone a process of “taming” which makes them friendlier and easier to interact with. Witches and Pagans interact with fairies in ways that enhance their belief in them, and make them feel real. In modern Pagan/ Witchen folklore, fairies are spiritual helpers, healers, and nature spirits who offer evidence of an enchanted world and warn of environmental destruction.

Sabina Magliocco, Ph.D. is Professor of Anthropology and Chair of the interdisciplinary Program in the Study of Religion at the University of British Columbia in Vancouver. A recipient of Guggenheim, National Endowment for the Humanities, SSHRC, Fulbright and Hewlett fellowships, and an honorary Fellow of the American Folklore Society, she has published on religion, folklore, foodways, festival and witchcraft in Europe and North America, and is a leading authority on the modern Pagan movement. She is the author of numerous books and articles, including The Two Madonnas: the Politics of Festival in a Sardinian Community (1993, 2005), Witching Culture: Folklore and Neo-Paganism in America (2004), Neopagan Sacred Art & Altars: Making Things Whole (2001), and with filmmaker John M. Bishop produced the documentary film series “Oss Tales,” on a May Day custom in Cornwall and its reclamation by American Pagans. Her current research is on nature and animals in the spiritual imagination. https://anth.ubc.ca/faculty/sabina-magliocco/ 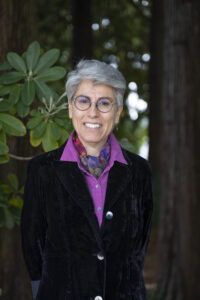