The Creative Life of Tirzah Garwood Ravilious by Lotte Crawford

The Modern Women Artists series of collectable books reveals an alternative history of art, telling the story of important female artists whose art might otherwise be overlooked, overshadowed or forgotten. Working across a range of disciplines and artistic styles in the first half of the twentieth century, all of the women included in this series were modern. Read together, these books begin to redress the untold history of modern art, connecting stories of female creativity which the history books have all too often left out. 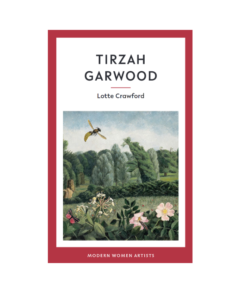 TIRZAH GARWOOD (1908 – 51) excelled in marbling, wood-engraving, collage and a style of painting which fused English romanticism with her domestic life.

Marriage – to the artist Eric Ravilious – and motherhood curtailed her artistic ambitions but not her imagination: she found creative expression and commercial success with intricately patterned papers created on teh kitchen table and in the bathtub.

In Garwood’s early wood-engraving and later paintings dolls houses, train journeys and shop fronts are infused with her acerbic wit. Overshadowed by her husband’s success, this book celebrates the story of Tirzah Garwood as an artist in her own right.

Harriet Olsen is the founder of Eiderdown Books. She established the independent publishing house specialising in books about women artists after more than a decade in musuem publishing (and having lost count of the number of books she’d produced about male artists). Harriet is also Head of Publishing at Pallant House Gallery in Sussex.