The Honour, Delight & Pleasure of Your Company

For The Launch of

A fully illustrated hardback catalogue of our pop up Cornish Museum with essays by Art Historian Adrian Dannatt, artist Marki Dion, Historian of Museums Arthur MacGregor & Richard Pell, Director of The Center for The Study of PostNatural History

Available now from all good bookshops for £10 & on our website , Pre-order a signed copy for £4 on the night 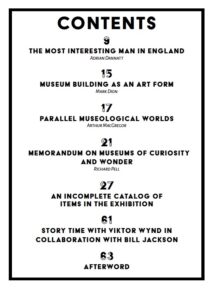 RAISING THE SPIRITS WITH DEVIL’S BOTANY

Produced by London’s first absinthe distillery, the inspiration for Devil’s Botany Absinthe Regalis arose from a curious elixir discovered in the recipe books of London’s 18th century apothecaries. Published in 1719 London, the instructions for this once-forgotten botanical spirit reveal a key to the origins of absinthe that had previously remained unknown. Nearly a century before the first absinthe distilleries opened in Switzerland or France, it turns out London’s dram-drinkers were already enjoying an early precursor to absinthe made by the city’s apothecaries. Praised for its revitalising flavour, this noble aperitif has been found most effective in raising the spirits for over 300 years.

Traditional, yet mysteriously exotic, Absinthe Regalis’ holy trinity of grand wormwood, green anise and sweet fennel is enlivened by warming spices such as nutmeg, cinnamon and cardamom—all once highly sought after symbols of luxury. The resulting distillate is then coloured naturally to achieve its emerald green hue from a new mix of botanicals, including white dead nettle and milk thistle which can be found growing wild throughout London.