Asgard was the spectacular home world of the Aesir gods. Odin, Thor and Loki are characters that “everyone” these days have some knowledge about due to their appearance in a lot of different types of popular culture. The gods and demigods of Asgard have definitely become fan favourites, but it turns out that there is generally little knowledge of who these heroes are really based on. In this lecture I will introduce you to the most famous gods of Asgard and tell you all about the impact they had on the Vikings back in the days when Thor and Odin played a major role in Scandinavian everyday life. Historians refer to three principal sources that depict Asgard; the Poetic Edda, the Prose Edda, and Heimskringla, which consists of several sagas. They will be the sources for this lecture as well. This will be an evening of captivating tales about the main characters of Asgard and the creatures that existed alongside them; we will meet Odin’s mighty horse Sleipnir, Midgardsormen -the world-circling serpent and the monstrous wolf Fenrisúlfr. Norse mythology has a cacophony of crazy creatures, charismatic gods and beautiful goddesses that will fascinate, spark curiosity and entertain you all at the same time.

Lena Schattenherz Heide-Brennand is a Norwegian lecturer with a master degree in language, culture and literature from the University of Oslo and Linnaeus University. She has been lecturing and teaching various subjects since 1998. Her field of interest and main focus has always been topics that others have considered strange, eccentric and eerie, and she has specialised in a variety of dark subjects linked to folklore, mythology and Victorian traditions and medicine. Her students often point out her thorough knowledge about the subjects she is teaching, in addition to her charismatic appearance. She refers to herself as a performance lecturer and always gives her audience an outstanding experience 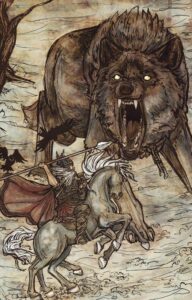 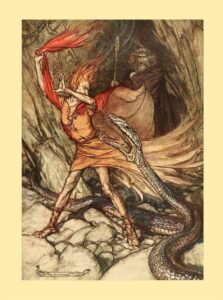 “Loki tricks Alberich” The Rhinegold and the Valkyrie sketch by Arthur Rackham,1910